Our culture views talking to yourself as a habit for eccentrics. Movies depict unhinged characters through herky-jerky self-mutterings. When people see an approaching pedestrian disagreeing with himself, they cross the street. And when a friend catches you in a solo performance of your thoughts, you clam up with an expression of sheepish guilt.

True, some mental disorders do manifest the symptom of self-talk, such as schizophrenia. But the habit is extensive among the mentally sound, too.

“Talking out loud can be an extension of [one’s] silent inner talk, caused when a certain motor command is triggered involuntarily,” explains Paloma Mari-Beffa, senior lecturer in psychology at Bangor University. “The Swiss psychologist Jean Piaget observed that toddlers begin to control their actions as soon as they start developing language. When approaching a hot surface, the toddler will typically say ‘hot, hot’ out loud and move away. This kind of [behavior] can continue into adulthood.”

Talking to yourself, when employed in the proper context, can even provide an arrangement of mental boosts. 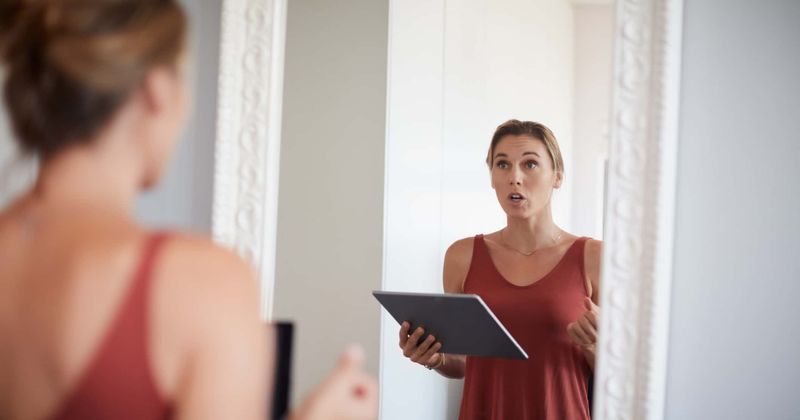 An exercise in self-control

Talking to yourself does more than put the lid back on negative motions; it can keep that lid from coming off in the first place. Research out of the University of Toronto Scarborough, also published in Acta Psychologica, suggests that talking to yourself is a form of emotional self-control.

Researchers asked participants to perform a simple test on a computer. If the display showed a specific symbol, the participants were tasked with pressing a button. If any other symbol appeared, they were to refrain. However, one group was told to repeat a single word continuously throughout, effectively blocking access to their “inner voice.”

That group was more impulsive than the group with access their inner voice. Without self-directed messages, they could not exercise the same self-control.

“We give ourselves messages all the time with the intent of controlling ourselves—whether that’s telling ourselves to keep running when we’re tired, to stop eating even though we want one more slice of cake, or to refrain from blowing up on someone in an argument,” Alexa Tullett, lead author on the study, said in a release. “We wanted to find out whether talking to ourselves in this ‘inner voice’ actually helps.”

“All right. Today we’ll go to the vet, grocery store, and visit Betty. Vet, store, Betty…” Talking to yourself about an agenda allows you to stay on track. “The mind can only process one task at a time even though we think we are multitasking,” says Julia Breur, PhD, a licensed clinical psychotherapist in Boca Raton, Florida. Enter talking to yourself. “We can be walking, driving, or preparing a meal when all of a sudden we are verbally responding to our thoughts, also known as ‘talking to ourselves.’” Doing this, she explains, helps your mind to sort through the day’s clutter so you can better prioritize. Is one of your errands re-organizing your fridge?

A study conducted by researchers from the University of Wisconsin-Madison and the University of Pennsylvania found that talking to yourself helps you find items quicker. They learned that when people uttered the very word they were looking for while they were in the midst of searching for it, their ability to locate it faster increased compared to those who didn’t repeat the particular word. There’s a reason you may walk around the house saying, “phone, where are you, phone?” as you search every room for the missing device—it works. The next time you’re feeling stressed about something, considering talking to yourself. It’s a normal way to cope with stress and anxiety, and helps alleviate pressures in life, says Dr. Breur. Doing so serves as a kind of pep talk; the sound of your own voice essentially acts as a reaffirming behavior, reinforcing that something is indeed doable. As a result, you’re less likely to hold thoughts in (because you’re speaking them to yourself) and more apt to voice concerns and feel more confident during stressful times. Don’t miss these strategies on stopping negative self-talk.

If you’re not the type to confront people who tick you off, talk to yourself about how they bother you or how unfair a situation is. Introverts are especially prone to missing opportunities to assert themselves. Put the “self” back in self-assertion.

Sometimes we’re sure we think one way, but our psyche tells us differently. Have you ever found yourself crying when you didn’t think anything was wrong? That’s your subconscious letting you know. Invite it to join your conversation to bring you to new levels of self-awareness.

Tags benefits lifestyle Talking To Yourself Golden Rules For A Live-In Relationship

The decision to move in together should not be taken lightly for many reasons. Whether …