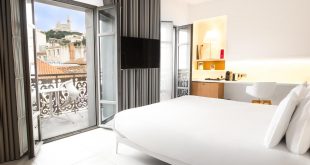 Muscat is the capital of Oman, and is located on the Gulf of Oman surrounded by beautiful mountains and desert. With a mix of intriguing history, upmarket shopping and stunning scenery, it’s a great place to explore. Read our insider’s advice on the best things to do in Muscat. 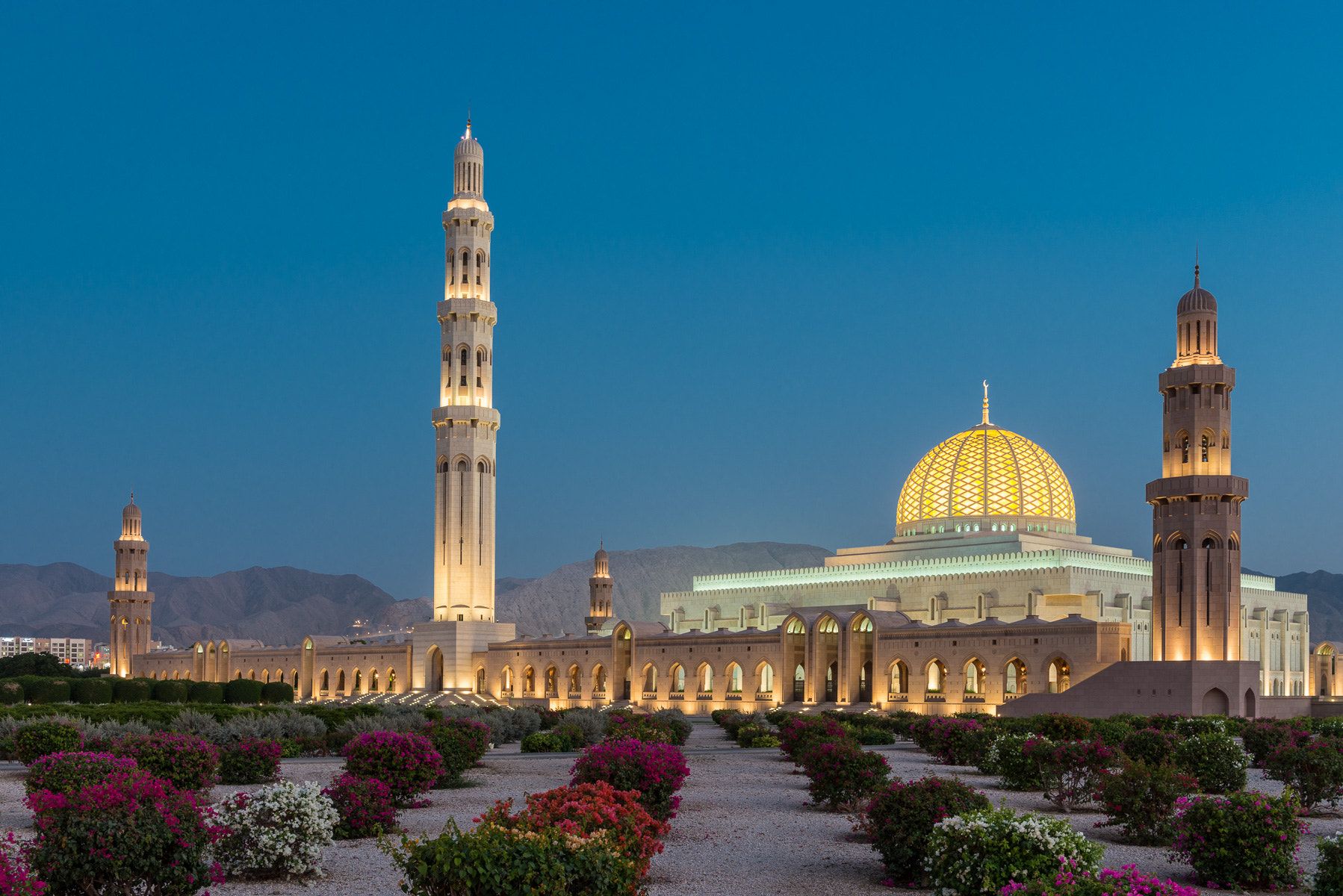 As the sun sets; the immense golden dome of the Grand Mosque is lit up and creates an ethereal glow that you can’t miss. As an important mosque in Muscat (and Oman, obviously), this beautiful building is impeccably designed and stands proudly iconic overlooking the city.

Inside the mosque, the incredible level of details is quickly evident – the central dome has a fantastic blue patterned design that is just gorgeous.

It’s easily one of the most beautiful buildings here and one of the best things to do in Muscat.

2. Watch a show at the Royal Opera House

Complete in 2011, this grand structure is arguably thought of as the most beautiful in Muscat (next to the Sultan Grand Mosque).

This gorgeous opera house is made from white marble and stone and its front façade has a myriad of pointed arches and symmetrical towers that are stunning to see. If you have some evenings free, make sure to book for a performance that is truly amazing!

Alternatively, if opera isn’t your thing, head out into the Al Hajar Mountains on an organised tour of the region. It’s one of the best things to do in Muscat. 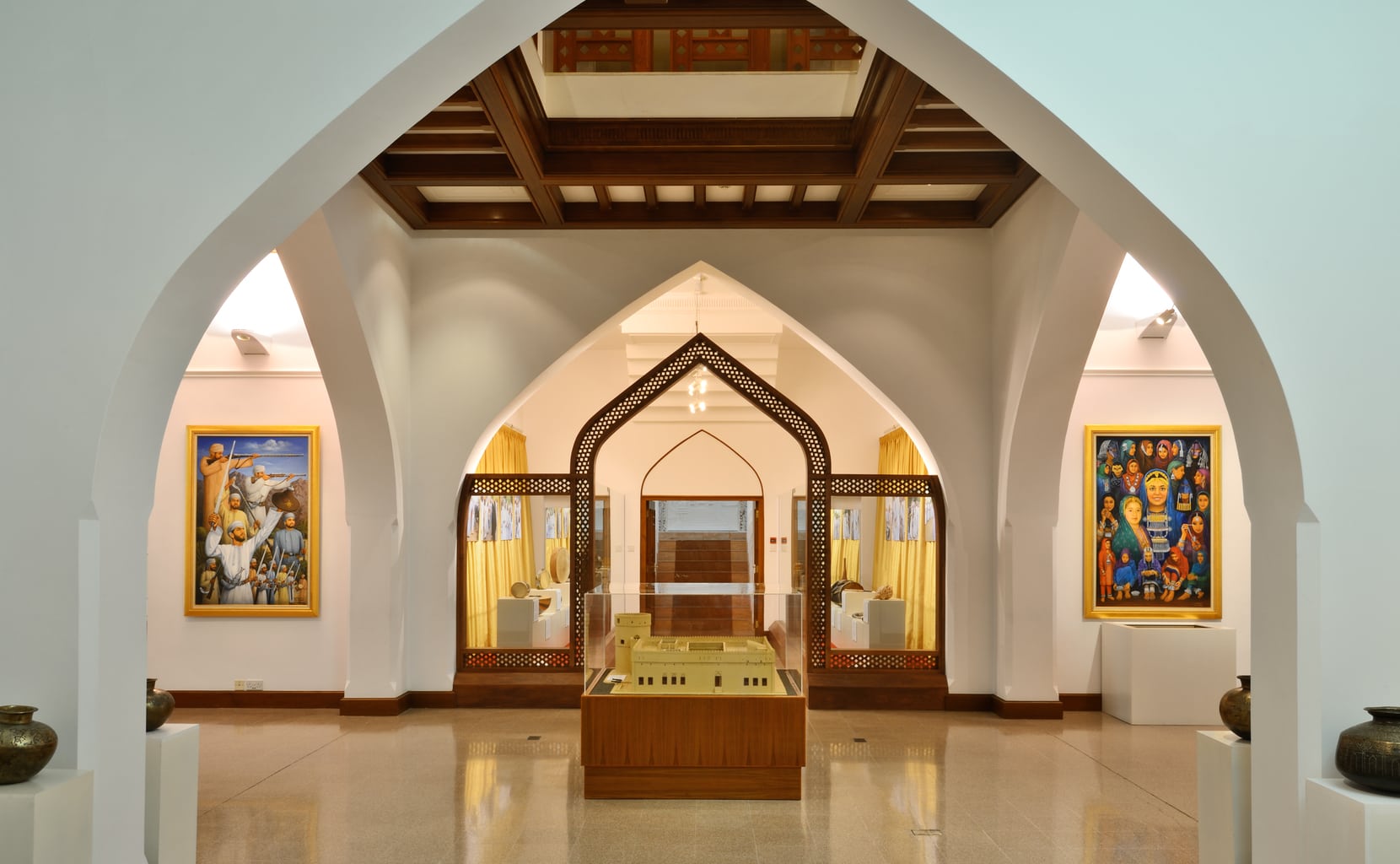 After visiting the Grand Mosque (above) in the morning, take the afternoon to stroll around Bait Al Zubair.

Located in Muttrah, the Bait Al Zubair Museum has an extensive collection of ancient artefacts, from around the region. Notable items include the fine display of traditional Khanjar ceremonial daggers gilded with gold, and a full-scale reconstructed Omani Village and Souq.

Honestly, though, if museums don’t get you excited, you might want to give this one a miss! You’ll find a heap of other best things to do in Muscat that won’t bore you!

A modern Islamic architecture masterpiece, the mosque holds the second largest Persian carpet in the world and once it held the record for the largest in the world. The intricate handmade carpet took around 4 years to complete. The mosque also houses one of the most beautiful and largest chandeliers in the world, and the interiors are basically commissioned works of art. The grand prayer hall can accommodate up to 20,000 people all at once. One of the most beautiful palaces in the world, the rich colour and architecture of Al Alam Palace is one of people’s favourite places to pose!

It has a rich history of over 200 years and is one of the residing palaces of the current Sultan Qaboos. With a façade of blue and gold the palace was rebuilt in 1972 and is surrounded by the Mirani and Jalali forts built by the Portuguese at around the 16th century. Although visitors cannot get very near the palace, they are allowed to take pictures from the front gates and get a good view. The palace is especially beautiful during the night as the lighting is spectacular.

Enjoy a hearty meal at one of Oman’s finest restaurants. It features Omani cuisine, with a contemporary twist at a spectacular location – the Royal Opera House. Al Anghams interiors tell a story as each room portrays something different (you can ask for a tour of the premises to learn more about the charming place).

This is not among the most famous Muscat attractions, but it’s well worth a visit, even if you’re not French! The Omani-French Museum displays pictures and objects that show the long-standing friendship between both countries. You can also see some gifts given by the French government to the Sultan, copies of old documents and letters. I really liked this museum and visited it twice in the last few years.

It’s right at the entrance of Old Muscat, on the way to Al Alam Palace.

The National Museum of Oman, which opened in 2016, is the country’s new flagship museum. This was my first trip to Muscat since its opening, so I was really looking forward to my visit. It’s located opposite Al Alam Palace, at the other end of the avenue. The building itself is modern with very distinct traditional Omani aspects – in other words, even though it’s very modern, you can see the Arab architectural style.