Oman has a large international population, succulent seafood and a booming (and air-conditioned) restaurant scene in which to escape the heat. We explore the best restaurants in Muscat, the capital of Oman.

Omani halwa is a staple of every Omani house. A gelatinous mixture of sugar, cornstarch, and ghee that’s flavored with saffron and rosewater, the dessert is served alongside black, slightly bitter Omani coffee, or kahwa. Variations abound and if you visit a halwa shop, you’ll be served small cup of kahwa to sip while you sit and sample dozens of flavors. Sold in small metal or plastic serving dishes, they make great gifts to bring home. The Al Hosni Omani Sweets shop in the northern suburb of Al Khoud has especially over-the-top bejeweled packaging and some fantastic variations, like their own secret recipe called “Special Halwa.” 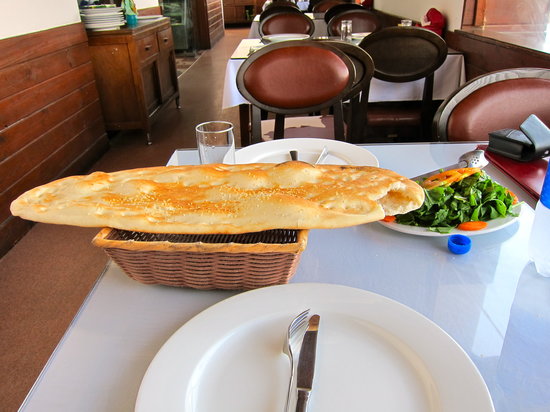 Muscat is a coastal city and the waters of the Sea of Oman are teeming with grouper, snapper, tuna, and the largest, sweetest prawns in the region. Run by a former fisherman, Turkish House is the absolute best place in the city to taste the fresh, local bounty. The restaurant has expanded with a large dining room close to the road, but set back behind it is the old dining area, which is much more charming. Order the mixed mezze, a massive platter of fresh hummus, baba ghanoush, tomato chutney, olive salad, and labne that comes with fresh, foot-long ovals of nigella-seeded Turkish bread. Then order grilled prawns and whatever fresh whole fish is available. The team will let you know which fish is the right size for you.

One of the favorite snack-time beverages in the Arabian Gulf is an adaptation of Indian chai known as karak. The super sweet, creamy tea is enriched with condensed milk and spices like saffron, cardamom, or the particularly interesting za’atar (not the Near Eastern spice blend in this case, but its namesake, wild thyme leaves). Alongside the karak, people order paper-thin Omani bread smeared with all kinds of fillings. Tea House, tucked between a date palm grove and a small mosque in the Ministries district, is the best place in town; go for the cheese, egg, and Chips Oman combo. Most people order for takeaway, but go in the evening and grab a seat at one of the outdoor tables and watch groups of young local men who gather there after evening prayers.

Everything about Ubhar is designed to enchant and plunge the diner into Oman’s mysterious and regal past. It shares its name with the ancient city supposedly now buried under the southern quarters of the city. Both the décor and the food are a medley of modern and historical Omani cuisine and design, though visitors are spared the traditional floor-level seating. Desserts are a highlight, especially the halva-based offerings: another of the impossibly sweet incarnations of the popular Middle Eastern treat. Daring diners can try the camel biryani, although the menu also offers an ample choice of more traditional meats.

The Beach is one of the best restaurants in Muscat and is the closest one can get to a true al fresco beach picnic in Oman, while still having the luxury of being served high-quality dishes with breathtaking panoramas of the Gulf of Oman. The dishes complement the view, with a seafood menu inspired by international cuisine: Mussels with kaffir lime and coconut, lobster tail carpaccio and whole grilled fish. The restaurant is open from September to May for dinner only, perfect for sampling an Arabic sunset and the day’s catch.

What can be more ideal than a cold drink and hearty food sourced from the finest producers, and cooked with great attention to detail. Duke’s Bar, in the Crowne Plaza Hotel, goes as far as a pub-restaurant in Oman can go in providing for this simple yet important need, especially for Muscat’s British population. Monthly menu shuffles keep the pub food interesting, with a good selection of lamb chops, kebabs, tagines and curries. Duke’s Bar is certainly one of the best pubs in Muscat, and boasts a pub food menu which would rival many UK establishments. 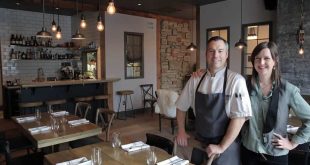 Adelaide is paradise for food and drink aficionados, and coffee is no exception. Caffeine addicts will find no shortage …