From 16-course degustations, to authentic Napoli-style pizzerias, African-inspired diners and fine-dining in historic cellar doors, Adelaide dishes up some incredible restaurants. Sample your way around the city’s best places to eat and drink on a gastronomic safari with our guide to the best restaurants in Adelaide. If your experience of Japanese cuisine is limited to plastic sushi plates rolling around a conveyor belt, then head to Leigh Street’s Shōbōsho and prepare for a flavour revelation. The latest venture from prolific South Australian restauranteur Simon Kardachi and with executive chef Adam Liston at the helm after stints in Shanghai and Melbourne, the Japanese-inspired menu blends smoke, steam and fire – the ancient traditions of Japanese yakitori. Raw, cured, pickled and fermented dishes complement smoky flavours with sashimi, noodles, yakitori, dumplings and bao on the menu. Décor is slick, rich and warm with a distinctly Japanese feel. The kitchen is open all day serving lunch and snacks, then dinner and drinks. 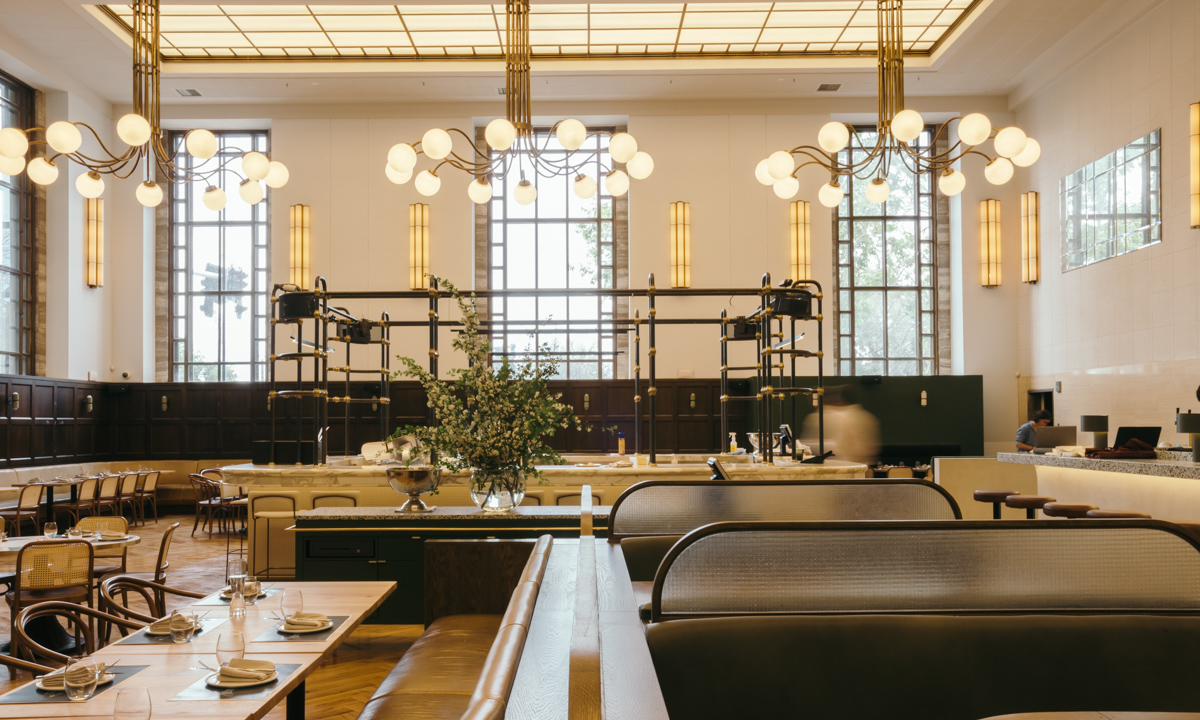 Whole fish, caviar, oysters, sashimi, prawns, mussels, scallops, lobster, crab, pipis, squid and more; no less than 30 different kinds of seafood are on the menu at Fishbank. And the love of all things ocean doesn’t end at the food. After-dinner cocktails carry on the sea theme. The Dorsal Gin is a favourite with local gin, vermouth bianco, fennel and citrus bitters, or sip the Now You Sashimi – an unlikely blend of vodka, wasabi, yuzu, mandarin and pickled ginger. Taking up residence in a grand former bank on King William Street in the heart of Adelaide, this seafood lover’s paradise is open for lunch and dinner seven days a week.

Italian-born head chef Luca Guiotto complements his traditional, handmade pasta and pizza bases with  seasonal local produce at iTL. The open kitchen produces sophisticated but simple Italian food and along with a bar stacked high with local and Italian wines, forms the centre piece for the iTL. One of four restaurants in the new SkyCity development, the 200-seat casual-dining restaurant is perfectly positioned on North Terrace, next to Adelaide Casino and within walking distance of the Festival Centre, Adelaide Oval and the bars of East End, Peel St and Leigh St.

From its inception, Sparkke Change Beverage Company wanted to make a difference, printing min-manifestos directly onto their beer cans. The Change the Date Pilsner caused enough of a stir to land itself in a recent Captain Cook exhibition at the British Museum.

The first physical home of Sparkke’s message, Sparkke at the Whitmore, launched in March 2019 as the CBD’s first women-owned and women-run pub and nanobrewery, and shortly thereafter announced lauded chef Emma McCaskill would head up the kitchen.

Adelaide’s hospitality scene is still male-dominated, but Sparkke at the Whitmore is evidence this is due to outdated power structures in the industry and not a lack of female talent and gumption.

Hearty and honest, Osteria Oggi is a pasta bar with an Italian piazza feel in the heart of the city. It’s light and modern with a pergola-style roof over a cobblestone floor. You can eat at long bench tables or inside booths; a long concrete bar serves as another eating area. Dishes include homemade tagliatelle with blue swimmer crab and braised rabbit with kale.

The Peel Street and Leigh Street laneways run parallel to each other, and both are home to plenty of cool bars and eateries. One of them is Gondola Gondola, a small, relaxed restaurant with a Saigon-style food stall feel. Vietnamese food is king here with influences from the wider Asian region. Smaller dishes include salt and pepper eggplant, while bigger servings include twice cooked duck and pork belly in fresh young coconut juice. Expect a wide variety of Asian beers, exotic cocktails, Japanese sake and South Australian wines. Take a short taxi ride from the city centre, across the River Torrens and through extensive parklands to little Italy in the form of Ruby Red Flamingo. There are several rooms on the ground floor and a balcony upstairs. Tables and chairs come in various sizes and shapes, blackboards work as menus and the cutlery is mismatched for a bohemian feel. Favourites include the arancini rice balls and the mezze maniche.

Previous Best Things To Do In Adelaide
Next Luxury Hotels In Adelaide, Australia